This weekend I came across a Harper’s magazine issue from this summer that had a couple features on the relationship between humans and animals. Some of the thought-provoking points are below, along with other research and a couple experiences of our own.

How different are animals from humans?

Barbara Ehrenreich brought up in ‘The Animal Cure’ how research is increasingly showing that animals “are not – intellectually, emotionally, or morally – all that different from humans.” Birds and monkeys use tools, chimps and others create works of art, and many fall into what looks like depression. She cited research on the American prairie dog. When living in Flagstaff AZ, I heard Northern Arizona University’s Dr. Con Slobodchikoff share his studies showing how prairie dogs communicate to each other, seemingly differentiating, for example, between the tall human in blue or the human with the gun. But there’s also danger in what she called too much ‘coziness’ with them – remember Timothy Treadwell’s grisly death in the movie Grizzly Man, or the chimps who have killed their owners.

Chimpanzee research published in Current Biology in April 26, 2010 showed the reactions of three chimpanzees at a park in Britain to the death of an elderly female chimpanzee. They were quiet and gave the groomed and caressed the dying chimp. After she died, they refused to nest on the platform where she had died and they demanded more attention from the keepers. Chimp mothers in the second study were observed after a disease swept through their clan of 19, killing five that included two infants. The mothers continued to carry the corpses around for weeks and even months. 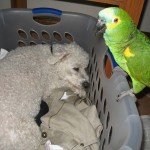 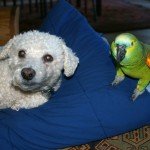 We’ve experienced reactions from our parrots when one of their flock died. In one case it was not a typical flock member. Our 30-year-old amazon, Caruso, ‘fell in love’ with our aging bichon frise, Ellie. We knew it was real when Caruso, sitting on the bed next to a reclined Ellie, uttered a ‘here sweetheart’ and proceeded to regurgitate some food for her. For the last four years of Ellie’s life, Caruso followed Ellie around and slept by her side in the closet — where she liked to sleep on our dirty clothes. Caruso waited by the door when Ellie needed to go out and pee; he soon began to bark when Ellie barked. We came to the hard decision to put Ellie down at age 17. For several days Caruso continued to walk down the hall to the closet to see if his girlfriend had returned but after waiting several minutes he would walk back to his cage. Then it suddenly stopped and Caruso jumped onto another obsession. Every morning as early as possible, Caruso began to mutter and flutter his wings to let us know it was time to go into his outside cage. Caruso never returns to the closet and now loves to sit in his outdoor cage from sunrise to sunset. He rings his bell as he watches the squirrels and birds in our trees, and occasionally gets excited about a barking dog in the neighborhood.

Ehrenreich also wrote about the how the change in religious beliefs demoted animals. Before Christianity, humans for centuries worshipped gods or deities that often had animal qualities or some animals and animal-human hybrids. Similarly the Pacific Northwest Makah people worship “Whale” who provides them physical and spiritual sustenance. She writes about this “huge step forward for humankind…[that] propelled us from the worship of beasts to the adoration of a perfect god. But it was a tragic demotion for animals.” Animals became reclassified as the inferior of humans.

There are plenty of examples of how animals, especially our wild animals, have fared with this demotion. The coyote — known in Native American lore and among naturalists for their high intelligence and cleverness — continues to especially suffer.

Next week the New Mexico coyote killing contest hunt takes place, which is a reminder of the terrible statistic that on average, one coyote is killed every minute in the U.S.. Camilla Fox of the Project Coyote, an organization dedicated to changing the attitudes toward coyotes and other predator animals, encourages us to collectively change state laws so that coyotes and other wildlife are protected from wanton abuse and cruelty. (See my prior blog articles on federal coyote killing and Project Coyote’s coyote education work)

As always, open to others’ animal experiences…

In Defense of Animals

My goal is to educate about the science of nature in layperson speak, through my writing, science and education background. I grew up in the Chicago area, loved living in Minneapolis before gravitating to the West, which is now home.
END_OF_DOCUMENT_TOKEN_TO_BE_REPLACED