Our eccentric died in December. Ten years ago we adopted Dusty, a 30-year old African grey parrot into our family. All we knew about Dusty was he had three prior homes that ended in divorce or break-ups. Doing a little math tells you that with three homes, six people didn’t want to keep him over the years. He obviously had behavior problems, or at least he wasn’t the parrot they expected. I’ll tell a few Dusty stories before getting to why he, our other parrots and even the many wild birds outside are such special beings. We’ve all read about the surprising abilities of birds such as crows, ravens and jays. Brain research is shedding research on why.

Dusty Tales But first, Dusty…. He didn’t exhibit the typical shy period that rescue parrots go through when he came into our home. From the first hour, he looked us straight in the eye. My husband, Tom, is 6’4” and weighs 230 pounds. Dusty weighs way less than a pound. Tom loves animals, is gentle with them and they love him back. Nearly always that is.

The defining moment of their relationship occurred one summer day before we figured out a way to thwart his climbing down from his cage, Dusty liked to wander over to the den, particularly when he heard Tom’s voice. One day I heard a yell, followed by a loud ‘peep’, Dusty’s signature sound when he was particularly happy. My husband was swearing and looking down at a bitten, bloody toe. Tom was mad. Dusty stared up at him, not moving an inch. My husband got madder. Within seconds, Tom was on the floor on his hands and knees, pounding his sandal next to Dusty yelling ‘don’t bite!’ Again, not budging, Dusty looked up at Tom, and vigorously tapped his beak on the floor. When you consider the size difference, the score was Dusty 1, Tom 0. Over the next 10 years Tom was never able to get Dusty up on his hand. What’s worse is the number of times I saw my husband running out of the room as Dusty charged him. 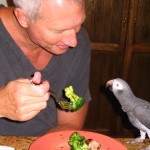 Talking Ability Over the years I’ve had – and lost – parakeets, cats, ducks, bunnies and a dog. I cried about them all. But while our parrots equaled our dogs in offering amazing companionship, there’s something about the ability of parrots to talk, sing and make sounds. We expected our parrots to talk, especially an African grey parrot known for its talking ability. Many people have heard about Alex, the African grey owned by researcher Irene Pepperberg. Alex knew 100 words, and could label objects correctly. He even developed new words; for example, he called an apple a ‘banerry’, a likely combination of banana and cherry. However, we realized early on that we weren’t going to spend hours every day training our parrots – it’s hard enough to take the time to clean their cages – so lowered speech expectations. Dusty didn’t talk a lot but his utterings were the most appropriate. For example, one warm spring afternoon I took Dusty outside with me as I gardened but moved a little too far away. “Right here!” he called out, followed by “Are you alright?” He only used those phrases that one time, but obviously learned them in a previous home. Bird Brains: Pretty Smart…

So, how do parrots and other birds have this ability? A while ago I talked to neuroscientist Dr. Erich Jarvis about the surprising intelligence of birds. (See my prior post here.) Jarvis heads up the Neurobiology of Vocal Communication Lab at the Howard Hughes Medical Institute in Durham NC. I’ve been meaning to share info from research of his staff and his colleagues. Such as:

The Takeaway: One thing Jarvis said is that when you hear a songbird sing, “remember that it’s learned — the bird learned it from a tutor like we did — and it’s a song that’s been around for thousands of years and that’s been passed on from generation to generation, just like we [humans] have with our speech.” They even have regional dialects. Birds are pretty smart beings.

My goal is to educate about the science of nature in layperson speak, through my writing, science and education background. I grew up in the Chicago area, loved living in Minneapolis before gravitating to the West, which is now home.
END_OF_DOCUMENT_TOKEN_TO_BE_REPLACED