Here in Redlands CA, ESRI employs 2000 and is a huge presence in our town. With hundreds of sycamore trees dotting ESRI’s campus, the tree is obviously a favorite of the company’s founder, Jack Dangermond. “I like this tree. It makes people feel good when they are around them,” says Dangermond. He followed with more than a dozen characteristics, which include its rustic, casual character and sculptural multi-colored trunk, big beautiful leaves that offer changing seasonal colors, and its plentiful food for birds. But of course, It’s hard to find a perfect tree. Sycamores can be messy, and they may trigger allergies for some people.

The California or Western Sycamore (Platanus racemosa) is also a favorite of mine. Here is some info about this fast-growing, deciduous tree.Plant characteristics: According to Las Pilitas, a native plant nursery that offers nice descriptions of native plants, the sycamore is a 75′ deciduous tree that grows fast, sometimes 15-20 feet in five years. It’s usually found along creeks in the foothills and coastal ranges of California. So, while it takes wind and heat, it’s not drought tolerant until established. Leaves turn yellow in the fall before falling off for the winter. The white bark with chips of brown spotted here and there offer an attractive formal trunk. 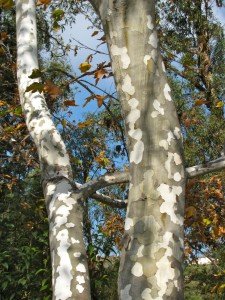 Habitat Value:This is a very important wildlife plant. Spring through fall my husband and I like to float in our pool and watch the parade of wildlife in our sycamores. It’s a favorite nesting tree for hummingbirds, and they gather the fuzz under sycamore leaves to line their nests. We watch them perch the rest of the year to harvest the hovering insects. Many other birds eat the tree’s seeds. Butterflies use it extensively, especially the Western Tiger Swallowtail whose caterpillars depend on it as a food source.

Planting Tips: Because sycamores often grow near water, they can be planted in lawns. Water well during the first years. Dangermond has found they do best with periodic deep watering but don’t seem to mind almost any condition except extreme drought. Dangermond’s brother Allen taught him to plant them in clumps and sometimes crooked to provide a more natural feeling. If you seek that natural look, plant them 15-degree angles. You can also create a wild look by planting three trees 3-5′ apart and leaning out.

Where to buy it: Most nurseries carry sycamores, including local nurseries such as Johnny’s Nursery.

My goal is to educate about the science of nature in layperson speak, through my writing, science and education background. I grew up in the Chicago area, loved living in Minneapolis before gravitating to the West, which is now home.
END_OF_DOCUMENT_TOKEN_TO_BE_REPLACED