My last article on habitat gardening introduced some basics and exciting things I learned about beneficial insects in gardens. This was after  attending an all-day Habitat Gardening workshop given by Frederique Lavoipierre, Director of Education at the Santa Barbara Botanic Garden. This column delves into bees, butterflies, and the importance of our moths, wasps and flies, plus tips and favorite plants for attracting beneficial insects.

Native bees – and flies– as pollinators

Everyone thinks of the European honeybee when they think of pollinators, but many native bees are as good or better pollinators. (The mason bee is one that’s better.) There are a whopping 1600 different species of native bees in CA. Nearly three-fourths nest in the ground so it’s good to keep some bare, unmulched ground on your property to attract them.

“There are lots of articles on how to help the European honeybee but we need to protect the native bees, and that’s by planting more native plants,” Lavoipierre said. She said bumblebees are a particularly overlooked and critically important pollinator and are decreasing in number. 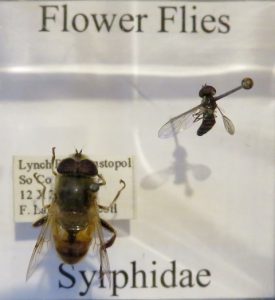 Flies: After bees, flies are the second best pollinators, with syrphid (Syrphidae) or flower flies a common one. As mentioned last column, beneficial insects seek both flowering plants and prey. Lavoipierre recommended keeping some aphids on your plants — milkweed being a good supplier of aphids — to keep these flies and other beneficial insects around.

A few beetles are pollinators, while some like soldier beetles are beneficial insects that eats pests. Beetles live in the top layers of the soil where it interfaces with leaf litter so it’s best to not disturb that layer much. They’re also good decomposters.

Butterflies, though generally not good pollinators, are always popular. Who doesn’t like a butterfly garden? But how many of us ask about caterpillar gardens? Butterflies first have to be caterpillars, which have vital relationships to their host plants. Lavoipierre emphasized the need for native plants because while some have found exotic host plants, most thrive best on native plants for their larva.

Most people know monarchs require milkweed plants (see below for Lavoipierre’s take on native vs tropical milkweed). Besides providing long-blooming flowers for nectar, buckwheats support a number of butterfly caterpillars, including the Acmon blue and Common hairstreak.  The Acmon blue will also use deerweed or locoweed, while the American painted lady likes yarrow, mugwort  or California sagebrush. The beautiful Giant swallowtail thrives in our area because citrus is an important host plant. For other species, many good websites can guide you to the appropriate host plants.

Lavoipierre also talked up moths, saying they’re  “sadly neglected in the garden. Some moth species have been among the worst pests in agriculture, however for most moths, damage is usually difficult to detect.” Plus, she refers to moth gardens as “bird banquet gardens, because they are a critical bird food, especially in the spring when adults feed their young.”

Butterflies generally fly during the day and are more brightly colored than moths – but not always. Spectacular moth species include the Ceanothus silkmoth. Ceanothus, coffeeberry, gooseberry or manzanita are all host plants that will attract them. Other noteworthy ones are the woolly bear caterpillar, which becomes the tiger moth, while the hated tomato hornworm is the caterpillar stage of the beautiful sphinx moth.

Lavoipierre also discussed the milkweed issue with monarchs – should we plant non-native tropical milkweed, which I can attest grows super well, better than most of my native milkweeds. Lavoipierre discourages tropical milkweed for two main reasons: tropical milkweed doesn’t die off in much of California, and allows disease to build up in monarch populations. And because it blooms year round, it’s changing their normal cycle. “Cutting down the tropical milkweed in the winter helps, but how many people remember to do this for every milkweed on their property?” she asked.

During the workshop Lavoipierre discussed garden features that support Conservation Biological Control (CBC), an important component of habitat gardening. CBC differs from classical biological control, where exotic enemies are imported such as the parasitic wasp for the Asian Citrus Psyllid. (Click here for my article on beneficial insects and ACP) Instead, it involves modifying the environment to protect and enhance resident natural enemies.

“CBC is less expensive and avoids the use of chemicals,” she said, and also creates a positive feedback loop where the pest populations are reduced more slowly, and thereby keep the natural predators around. That means it requires more patience.

An important feature to promote CBC is structural complexity, “where you offer different habitats ranging from grasses to trees.” Yards need grasses, shrubs of various sizes, trees and hedges. She explained that the habitats will vary each year, giving rise to varying populations of beneficial insects; for example, last year was a great year for ladybugs. I agree, having had a large California buckwheat that served as a productive ladybug nursery last summer in our front yard.

Having many insect species and also having them in abundance are also key features. Plus, offer habitat islands and corridors so there’s connectivity. “Plant in patches so insects can move quickly and easily for more prey and flowers. And having hedges and edges increases the number of insect species,” Lavoipierre said.

Lastly, beneficial insects need water and shelter. For shelter, she recommends permanent mulch, grasses, and letting logs decompose, advising people to ‘not be so neat’ or at least allow a portion of their yard to be a little messy where insects can shelter and overwinter.

As for ordering boxes of beneficial insects, such as ladybugs, she discourages it because the ladybugs do their job and then move off. But she gave two exceptions. “Buying parasitoid wasps to protect heritage trees can be a good idea; also buying lacewings to establish a population can often be successful,” she said.

Lavoipierre provided a list of her favorite plants for attracting pollinators and beneficial insects.

Except for the verbena, all have done well on our property. And with the increasing number of insects and nesting birds on our Redlands property, I can attest they’re doing their job.

My goal is to educate about the science of nature in layperson speak, through my writing, science and education background. I grew up in the Chicago area, loved living in Minneapolis before gravitating to the West, which is now home.
END_OF_DOCUMENT_TOKEN_TO_BE_REPLACED