This is from a friend of mine, Denise Morse, a fellow defender of the environment. We served together on a land trust board in Alpine CA. She writes about Madera Canyon in the Santa Rita Mountain Sky Island – a wildlife haven outside Tucson that is facing a new copper mine

I parked facing west looking at a heavily vegetated tall mountain region that was crowned by ominous storm clouds. I pushed back my seat and rolled down the windows and began to listen for nature. It wasn’t long before I heard a woodpecker tapping diligently on what looked like an Arizona White Oak. The industrious bird was soon interrupted by a fellow Strickland Woodpecker and they began to squawk and chase each other from tree to tree.

I wondered — how will future projects in the Santa Rita Mountains impact the inhabitants of this remarkable Santa Rita Sky Island?

One stifling hot afternoon during monsoon season in Sahuarita, Arizona, I decided to head for the mountains about 25 miles south of my house to listen to what nature had to say. My home office window offers a breathtaking view of the colorful Santa Rita Mountains, one of the southwest’s premier Sky Islands.

The term Sky Islands is used to describe mountain ranges that are surrounded by a “sea” of desert, an environment considered hostile to the higher elevation island inhabitants. Just like islands surrounded by water, the animals, birds, trees, shrubs, soil, bacteria and other organisms that live on the island are dependent upon each other for survival. 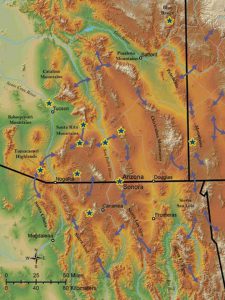 Located between the 30th and 33rd parallels on the North American Continent along the US-Mexican border, sits the home to the Santa Rita Mountains, and the Chiricahuas and Huachucas mountains– collectively called the Sky Islands.

I traveled across the desert until I came to a series of one-lane bridges that crossed seasonal arroyos. 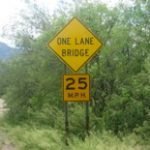 I quickly left the unrelenting desert heat and humidity and climbed to an altitude of 5400 ft where I was met with a cool temperature of about 85 degrees.

The plant zone transition changes quickly in Madera Canyon. Saguaros and creosote give way to mesquite, acacias, and ocotillos, followed by evergreen oaks and junipers that graduate to cottonwoods, sycamores, walnut and ash. The seasonal tributaries contribute to a variety of wildflowers that share their beauty only upon receiving just the right amount of summer rainfall.

Entering the Coronado National Forest, I was greeted by white-tailed deer on each side of the road. I slowed down to get a glimpse of these peaceful animals that looked back with no fear as if they knew they were safe within the confines of the Canyon. They appeared trusting, yet vulnerable.

Madera Canyon is well known to naturalists who continue up the mountain on foot to reach Mt. Wrightson towering toward the sky at over 9,000 feet in altitude. 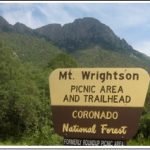 New Copper Mine? The Santa Rita Mountains are also home to an abundance of minerals like dolomite, and a host of other “ites”. But Arizona is probably best known for its copper mining. From my house, looking west, the legacy of mining is quite evident during and long after the pit is emptied of its coveted resource. Tabletop mountains with green brims burnished by copper tailings struggle to give life to re-vegetation projects because the soil no longer supports the organisms and nutrients required for life.

A proposed new copper mine on the Santa Rita Mountain Sky Island is currently working through the regulation process. The mine’s representatives speak of new technology that would prevent the “mistakes we made in the past” and boast of their state of the art water conservation program claiming that “we have enough water for 200 years and maybe even 400”! How much is enough?

Locals in the area claim that the copper is considered “low grade copper” that will be sold to foreign countries at the environmental expense of all of nature living in the area. Will this “new technology” disrupt more of nature than initially thought?

The contentious use of eminent domain is described as: “The power to take private property for public use by a state, municipality, or private person or corporation authorized to exercise functions of public character, following the payment of just compensation to the owner of that property”

The mining company apparently is a “corporation authorized to exercise functions of public character”, but does not have to compensate any of the islanders for destroying their homes. And I am sure the part about mining low grade copper that hijacks groundwater and degrades air quality is not considered by most a “function of public character”.

Douglas Moore in his book, “The Nature of the Madera Canyon” writes: “The greater the genetic diversity, generally the more adaptive a species will be to environmental change. The adaptive potential of all organisms is genetically based and directly proportional to the size of the area inhabited, as well as the overall size of the population. Decreasing the area in which a species lives, reducing the population size or not allowing new individuals to migrate between populations, will lead to a greater possibility of extirpation in the event of natural or man-made disasters.”

As I reluctantly coasted down the hill making my way out of the canyon and onto the steaming desert floor, I thought about the islanders who live on the Santa Rita Sky Island. I wondered what would become of these diverse creatures that complete my world.

Furthermore, what will become of our galactic island called planet Earth?

“The Nature of the Madera Canyon” Douglas Moore

My goal is to educate about the science of nature in layperson speak, through my writing, science and education background. I grew up in the Chicago area, loved living in Minneapolis before gravitating to the West, which is now home.
END_OF_DOCUMENT_TOKEN_TO_BE_REPLACED