Our housesitter called when we were away to say that we hadn’t told her about our unexpected friend. At dusk she had walked out onto the back patio and discovered a 5-foot gopher snake slithering along the house. Knowing our respect for critters, she successfully whisked it away with a broom. We hope it stays around. After all, gopher snakes eat lots of rats and other rodents, which also seem to like our yard.

We’ve seen – and welcomed – several other natural guests: among them harvester ants and native bees, both often misunderstood. And there’s one we would rather have not visit us – the domestic cats. Here’s why we welcome some and not others.

Gopher Snakes and other snakes

Snakes play vital roles in limiting the size of rodent populations. Like owls and hawks, we’re happy to let them perform natural rodent control. As their name indicates, gopher snakes are excellent if you have gopher issues. This was the case at our three-acre San Diego home that sat on a canyon.

Did you know? Other commonly sighted snakes in our area: western coachwhips (also called red racers), California kingsnakes and several types of rattlesnakes.

A month ago my husband came inside and announced the harvester ants had arrived. That’s a good thing – harvester ants are particularly misunderstood. They do not invade homes. Instead, they carry seeds and pieces of litter and sometimes dead insects back to nests in the ground. They can bite if disturbed but rarely do. You find their nests in open areas, with no vegetation within several feet around the central opening of their colony.

Most of the 22 species of harvester ants occur in the West. According to Anna Dornhaus, University of Arizona ecology professor,ants are over-labeled as pests. “Ants in general are extremely useful and important ecologically, they remove dead insects and other small animals, they disperse seeds, protect plants, etc. ”

Did you know? Dornhaus views the complex societies exhibited by ants as ”much like ours in many ways, including democratic decision-making, division of labor and agriculture.”

Since we’ve taken out some of our grass and planted natives and other flowering plants, bees of various sizes visit. They range from large bumblebees and carpenter bees to tiny ones 1/8 inch in length. Of the couple hundred species native to Southern California, some are generalists and pollinate many plants, while others just pollinate one. Most nest in the ground where you’ll see holes in bare dirt. Some nest in plant stems or fence posts, decaying wood. A prior post included info on how we attracted native bees.

Did you know? The solanacae family of plants (tomatoes, peppers and potatoes) depends on bumblebees for pollination. Adding native bees to greenhouses in California has allowed year-round growing of tomatoes.

Last month it was a dead baby rabbit. Last week it was a baby scrub jay that had been maimed a week earlier but had survived. We heard the mother jay calling from the front, but didn’t go outside to see what reason. We assumed it was one of the Cooper’s hawks or since it was dusk, one of the neighborhood’s great horned owls. We had noticed a cat prowling our property, and the next morning we found some wing pieces but no body. The mom (or dad) jay let us know we were getting too close to the sage bushes where we glimpsed it and left it to hopefully recover. Fast forward to a couple days later when outside I heard jay alarms outside my office. See photo for what I found.

Trying to understand if it was a cat or perhaps our cooper’s hawk I talked to Gail Garber, director of Hawks Aloft. She said hawks pluck the feathers off first and then eat the head first. On the dead baby jay, except for the damaged wing on one side, the bird’s feathers were intact. Most cats do not eat their kill. 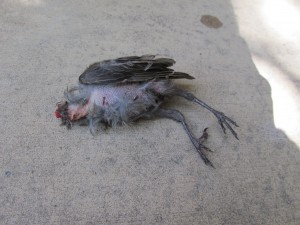 I know the issue of outdoor cats is an emotional one, especially as more research is showing their effect on wildlife. I’ve had cats – both indoor and outdoor- and the next cat I get will definitely be an indoor cat. In the meantime, I welcome the critters natural to our area to keep our ecosystem in balance.

Did you know? The latest research shows free-ranging cats cause substantially greater wildlife mortality than previously thought and are likely the single greatest source of mortality for US birds and mammals

Bees: Xerxes Society ’s website (which was named for an extinct California bee, great info on all invertebrates)

My goal is to educate about the science of nature in layperson speak, through my writing, science and education background. I grew up in the Chicago area, loved living in Minneapolis before gravitating to the West, which is now home.
END_OF_DOCUMENT_TOKEN_TO_BE_REPLACED