It’s rattlesnake time! Recently Cowboy Jack, a dog of my petsitter, Kristy Bagwell, ended up in a serious tussle with a Southern Pacific rattlesnake. The snake got bit too and died, while poor Jake, a Jack Russel/beagle mix, was rushed to an animal hospital to receive two vials of antivenom (along with  iv fluids, steroid shots, antibiotic shots and a laser treatment to cut down on tissue damage in his face.) His face swelled up to an alarming degree but five days later, Jake is almost back to his old self.

I recently came across a Red Diamond rattlesnake on a hike in Hemet’s Diamond Valley Lake , and it was only one of two times in my life that a rattlesnake stood its ground, so it was an easy decision to take another path.  I also heard from a Southern California reader who has been trying to educate her neighbors about relocating rattlesnakes instead of killing them.

So it seemed time to check in with rattlesnake expert William K. Hayes, Professor of Biology at Loma Linda University. Dr. Hayes has helped me with my other rattlesnake posts – see Relocating Rattlesnakes and It’s Springtime for baby rattlers and other snakes  for a couple of them.

The main takeaway: rattlesnakes provide a great service of rodent control if you can allow them to live near you, and relocation works if you can’t.

For this post, Dr. Hayes provided some current info on rattlesnakes regarding safety for our dogs.

Current thoughts on the Dog Vaccine

Hayes explained that the rattlesnake vaccine requires injecting somewhat modified venom from the Western Diamondback Rattlesnake in the dog. The venom is comprised of many toxins, and the dogs develop antibodies to those toxins.

First, do the snakes that bite their dogs have the same toxin representation as the Western Diamondback Rattlesnake? “The venom composition is reasonably similar for the Red Diamond Rattlesnake, but much less so for the other rattlesnake species–especially the most common and widespread species, the Southern Pacific Rattlesnake. Thus, the dogs will end up with few antibodies for the toxins that really matter,” says Hayes. Versace, another dog of Kristy Bagwell’s got bit, again by a Southern Pacific rattlesnake, and had received the vaccine. She reports he did much better than Jake, so in her case, the vaccine helped enough.

A second issue for Hayes is how much the injection stimulates a strong antibody production.  The available research suggests that the vaccine’s response is weaker than the antibodies produced after a snakebite. Hayes says this would be expected if the quantity of venom injected for the vaccine was less. However, Hayes said he wants to examine the research more to see whether different snake species (and different venom composition) were compared in those studies.

Finally, there is some concern that some dogs injected with the vaccine will become allergic to the venom itself, which happens in some humans. “At this point, I don’t think we have good data on the frequency of this possibility, as it might be minute; but some veterinarians believe they are seeing occasional anaphylaxis that could be explained by hypersensitivity to the venom rather than by actions of the venom itself,” Hayes says.

Hayes has collected venom samples from hundreds of snakes of seven southern California species, including Crotalus oreganus north of the Mojave Desert, which has now been recognized as a distinct species. 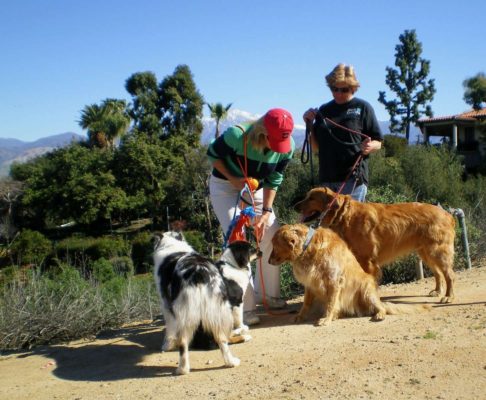 Hayes believes in rattlesnake avoidance training. The primary means of training dogs to avoid rattlesnakes has been via use of shock collars, or e-collars. Hayes said some people object to the practice, insisting it is ineffective and cruel. However, “there is a growing body of literature showing the efficacy of shock collar use for altering dog behavior,” he said.

Also, Hayes thinks most can agree that the effects of snakebite — which far too many dogs experience — are much more cruel that the momentary pain experienced during a brief training session.

Hayes mentioned he has research under review for publication that summarizes the first study undertaken of rattlesnake-avoidance training. “Dogs tested for a second or third time (once each year) clearly avoided rattlesnakes better than naïve dogs trained for the first time. We interpret the results to support efficacy of training,” he said.

Cowboy Jacck’s owner, Kristy, who also runs a rescue so hosts other dogs at times, is a strong proponent of rattlesnake training.  She had taken a rattlesnake aversion class, and a couple days after Cowboy Jack’s  encounter, performed training — using the dead snake – on her dogs.  Although a dead snake works, Kristy recommends a trainer with a live snake, if possible, saying the rattlesnakes are muzzled for safety.  A couple different types of snakes will be important as well, as each type smells differently.

And even Cowboy Jack participated.”He was a good sport at first, but the rattle sound and the sight of that snake did it in for him,” says Kristy.”I think he will be avoiding them in the future.”

Hayes – a wealth of information (please see my other rattlesnake posts) – is glad to provide a lecture to groups of pet owners and veterinarians in the Southern California region.  His email is whayes@llu.edu or leave a message at 909-558-4530.

My goal is to educate about the science of nature in layperson speak, through my writing, science and education background. I grew up in the Chicago area, loved living in Minneapolis before gravitating to the West, which is now home.
END_OF_DOCUMENT_TOKEN_TO_BE_REPLACED