An article I wrote about rats, snakes and bees appeared today in our local paper. Since I gave an update about rat poison and wildlife last month, let’s talk snakes. I like snakes. I know I’m unusual in this, perhaps because I didn’t have brothers that terrorized me with them (real or not), and maybe living in the Chicago suburbs, where we didn’t have a lot of snakes, had something to do with it.

My husband also likes them so when we encounter them it’s a positive thing. My previous articles on snakes have mostly focused on relocating rattlesnakes, something we did quite often at our San Diego County property.  Also, friends who came across gopher snakes and had dogs or a reason to not want them on their property would drop them off on our property. We liked them because they were a good predator for rats and ground squirrels which were problematic in our orchard.

After coming across a beautiful gopher snake at Wildwood State Park in Yucaipa this spring, I thought I would check in with Loma Linda U. professor and snake expert, Dr. William Hayes.
The best study to-date of their diet indicates about 80% of their take is rodents. According to Hayes mature gopher snake can even eat a large ground squirrel, while small ones are good mouse catchers.”Having no legs to assist with chewing or prey dismemberment, snakes must consume their prey whole, which constrains them to consume only what they can fit into their mouth,” says Hayes, so the size of meal will generally correspond to the size of the snake. While most prey items are much smaller in mass than the snake, a gopher snake can consume an item that weighs as much as the snake itself.

Less often they eat birds, bird eggs and lizards, which I’m less happy about. We’ve never seen one on our half-acre property here in Redlands, although a large gopher snake surprised our petsitter, which we would have loved to see.

Gopher Snakes are commonly mistaken for rattlesnakes and sometimes act like one. Hayes explained that gopher snakes that live around rattlesnakes are more inclined to defend themselves vigorously, with tail vibrations, hissing (which sounds like rattling), flattening of the head (making it appear broader and more triangular), and elevating the head in an s-shaped posture, all of which makes the snake more closely resemble a rattlesnake.

Other common non-poisonous snakes here in California are Western Coachwhips, also known as Red Racers, and the California Kingsnake, which we saw on our visit to Wind Wolves Preserve.

One piece of advice: in our previous home in San Diego, we also used netting to protect some of our young fruit trees from birds. Unless you continually monitor the netting, I don’t recommend them, as we’ve found dead snakes that wrapped themselves up in netting that had fallen to the ground. A friend sent me this unfortunate photo of a gopher snake, likely very old from its size, caught in netting (see right). 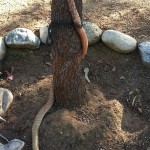 Snakes belong in our environment — even rattlesnakes, which can be safely removed. At our previous property in San Diego we’ve ushered them into a garbage can with a shovel or stick, or better yet, call animal control.

Snakes will live to around 20 years, if we let them. They do a lot of good for us.

My goal is to educate about the science of nature in layperson speak, through my writing, science and education background. I grew up in the Chicago area, loved living in Minneapolis before gravitating to the West, which is now home.
END_OF_DOCUMENT_TOKEN_TO_BE_REPLACED