Colleagues of mine, Marilyn Hempel, editor of the Population Press, and Monty Hempel, Chair of Environmental Studies at the University of Redlands, have just released two important items. The first is a film “The Eighth Billion” about the environmental costs of human population growth. It’s short – only 9 minutes – and contains gorgeous footage of landscapes and seascapes that are being irreversibly impacted by population growth. It illustrates sobering but important facts, such as how our population is adding 219,000 people every day – a billion people every 12-13 yeas. 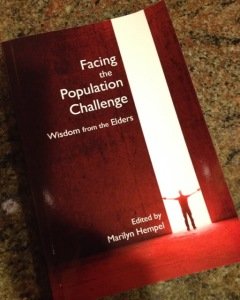 The short movie can be used as a complement to Marilyn Hempel’s recent book, Facing the Population Challenge. For the book, Marilyn invited 15 experts in the population field to share their wisdom, asking them, “If you could assemble the world’s leaders in one room, what would you say?” The essays cover two areas (1) family planning and the empowerment of women, and (2) sustainability issues.

I have some takeaways below but asked Marilyn what was most important for people to know.

First, she cited countries that have stabilized their human populations — about 60 including most of Europe and Hong Kong, which she said,” enjoy a high quality of life, including universal education, good health care, and equal rights for women and girls. They are on the road to sustainability. I hope the rest of us will follow their examples.”

She also wants to remind people that while the planet Earth may change, diversify or develop —it does not grow. “Nothing on it, no plant or creature, grows forever. But our culture and economy are based on growth. We cannot become a sustainable society until we give up our addiction to growth, and instead embrace a steady state. This does not mean stagnation.”

For 200,000 years, humans existed with very slow population growth, with about 100 million people in 1 AD, growing to around 300 million in 1000 AD. Then, population havoc happened.

2) Access to contraception for women is vital. Many of the essays highlight this need.

3) A long overlooked issue: Our exploding population is an old subject, and leaders have missed many opportunities to address population issues. The book begins with British philosopher John Stuart Mill’s essay who states in 1848 “… I confess I see very little reason for [increasing population.] The density of population necessary to enable mankind to obtain all the advantages both of cooperation and of social intercourse, has been attained.” When Mills wrote this, the world nearly 6 billion (6,000,000,000) less people.

What we can do:

– Bring up population concerns among family and friends. It shouldn’t be a taboo subject.

– Do our own part, including a look at our own family size.

My goal is to educate about the science of nature in layperson speak, through my writing, science and education background. I grew up in the Chicago area, loved living in Minneapolis before gravitating to the West, which is now home.
END_OF_DOCUMENT_TOKEN_TO_BE_REPLACED