I received this story about a blackbird named Bill in a Christmas card from my childhood friend, Linda Gurtz Hildreth. Such a good message…. thank you Linda. 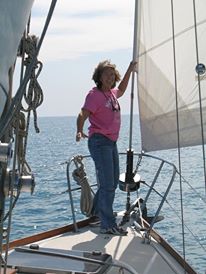 Linda and her husband Jeff go out on their large sailboat nearly every weekend and sometimes take the 10-12 hour trip from the west side of Lake Michigan across to the Michigan side. ‘Bill’ was aboard for less than 10 minutes. Her story:

“We were 16 miles out on Lake Michigan headed East when we saw a small dark thing flying at us with odd swoops, barely clearing the water. It was a red-winged blackbird who landed on our stern rail and sat there as we looked at each other in complete surprise. He was exhausted and was not going to make it much further.

He looked at us a bit longer, then shut his eyes and rested. We sat very still – never had this happened before.

He woke up, hopped to the dock line on the rail, and sat there looking at us before shutting his eyes again. We named him Little Bill. Linda quietly picked up the camera and took two pictures. Bill woke up and pecked at the colored specks in the dock line. He then flew to the bow, landing on the foredeck, and had a drink of water from the spots of early morning dew. 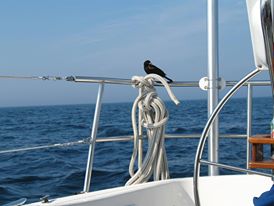 He hopped from drink to drink and when he got to the cabin he found all the insects that hide from the wind on the lee side. Bill ate a smorgasbord of bugs as he hopped towards the stern.

Bill swooped back up on the stern rail, looked at us and blinked, After a couple of seconds, he flew away towards Wisconsin in a direction that would, as we later looked at the chart, take him to land in the shortest distance possible. He flew with energized swoops and joy. We sat and thought about this for quite a while. 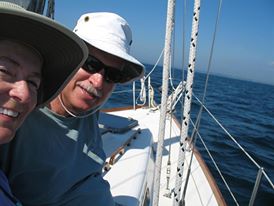 My goal is to educate about the science of nature in layperson speak, through my writing, science and education background. I grew up in the Chicago area, loved living in Minneapolis before gravitating to the West, which is now home.
END_OF_DOCUMENT_TOKEN_TO_BE_REPLACED