I just finished an interesting book, What a Plant Knows, by Daniel Chamovitz. I thought I would write up some highlights, which will also help me recall them better… I’ll break it into two posts: this one will cover what a plant feels and hears. 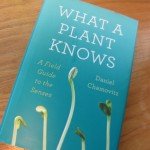 My takeaway : I can probably stop talking to my plants because they’re deaf — and I shouldn’t touch them too much. But research shows plants smell, use salicylic acid (aspirin) to ward off infections. Plants also see in a more complex manner than humans and have a surprising awareness. (My next post will cover what they see and smell.)

What a Plant Feels: Chamovitz, director of plant biosciences at Tel Aviv University, writes that it’s probably a bit disconcerting to discover that plants know when they’re being touched, with research showing arrested growth often results from too much handling. One group of studies by Frank Salisbury in the 1960s measured plant leaves. He noted that the leaves being measured never eached their normal length, and eventually died – while others leaves thrived on the same plant that weren’t handled.

How do plants feel? The signals involved are very similar in plants and humans – with the same calcium ions involved that create a charge and electrical signal. As in animals, this signal can move from cell to cell. When a branch is shaken or a tree root hits a rock, the concentration of calcium ions in the plant peak and drop. The venus flytrap plant that feels insect prey before trapping it is an example most people can envision.

Many researchers have studied the venus flytrap, but studies involving mimosa trees with their moving leaflets, cocklebur and a European native flowering plant (Arabidopsis thaliana) all demonstrate that plants feel.

But Chamovitz says “While plants feel touch, they don’t feel pain” (because they lack brains). Their responses are not subjective.”

Jack Schultz, a leading researcher in plant communication, says some touching of plants may be good for them. Now the University of Missouri’s Director of Life Sciences Lab, Schultz says, “Plants respond with toughening and chemical changes that can make them more resistant to stress, at least in the short term. Don’t overdo it, though!” He said one negative effect can be a reduction in reproduction long-term (less of an issue in houseplants)

What a Plant Hears:

Time to rethink the suggestion by some that you should talk to your plants. Chamovitz writes,”Reputable scientific studies have concluded that the sounds of music are truly irrelevant to a plant.” He acknowledges that other researchers propose that the correct experiments to detect this have not been done. And Schultz from the University of Missouri, says that talking can be form of gentle touch, which as we discussed above, plants do feel. His view: “The impact of talking to them will depend on how loud you are, since sound waves produce vibrations that are a gentle touch.”

Chamovitz does point out that plants have no need for communicaton that could allow for a quick retreat. They can’t escape. What we humans are used to in our world is irrelevant to a plant. Another interesting aspect in this section was that more than 50 human ‘deaf’ genes have been identfied by labs work wide – and at least 10 of these also show up in studies of the plant arabidopsis. (Arabidopsis thaliana was the first entire plant genome to be sequenced in 2000.)

Next up – Do Plants Smell and See?

My goal is to educate about the science of nature in layperson speak, through my writing, science and education background. I grew up in the Chicago area, loved living in Minneapolis before gravitating to the West, which is now home.
END_OF_DOCUMENT_TOKEN_TO_BE_REPLACED