I did a presentation on GMOs for our local AAUW discussion group and thought ‘why waste all that reading’ – so here’s a quick overview of what I learned. I read the following books: Mendel in the Kitchen by geneticist Nina Federoff, which was ranked more anti-GMO in this helpful article by Nathanael Johnson on grist.org, and Food Inc. (2003) by journalist Peter Pringle, which was more pro-GMO. I also read the Nature journal’s thorough articles on GMOs (May 2013), plus a recent book Creation How Science is Reinventing Life Itself by Adam Rutherford (2013), a fun read on current theories of how life began and where it’s going. 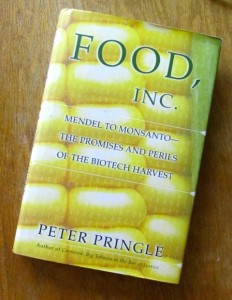 Overall, I continue to be concerned about the environmental issues surrounding GMOs (genetic modified organisms which result from genetic engineering or GE) — but I also came away with some positive potentials. I’m also more aware of how the biotech industry, with the help of U.S. regulatory agencies and legislation, sabotaged themselves with their decisions.

While this is very simplified, here is some of what I learned:

Which view will seem right to you depends on what you consider conventional – and how you define the ways of nature?

“The biotech companies like to say that GE is really only an extension of the traditional art of cross breeding, as practiced by Mendel in his monastery garden. The modern advantage is that GE is more fastidious and targeted, with results more predicable and by implication, safer…. The opponents hotly dispute this. They accuse the companies of distorting the realities of traditional breeding and turning a blind eye to the possibilities for genetic, environmental or human harm that could result from inserting an alien gene into a plant’s genome… In contrast, traditional breeding is the mixing or recombination of genetic material occurs between two plants that share a recent evolutionary history…. “

However…. one thing missing from what I read was the need for population control. Animals and humans who were responsible for the gathering (and growing) of their food have long regulated their reproduction based on food availability.

Because Africa — where the need for greater food production is high — exports to Europe, the European stance affects them. The 2002 African drought with millions at risk of starving provides a good example. Three countries refused GMO crop donations from the U.S.. Two finally accepted GMO corn that was milled so seeds couldn’t be used. But a long history of distrust also played a role. Food production had greatly increased worldwide prior to GM crops with advent of fertilizers, pesticides and hybrid seeds. However, this largely bypassed Africa because their farmers couldn’t afford these. Also complicating things were differing laws in Africa regarding property rights from the biotech companies like Monsanto (see below).

This created a backlash – A good example is Golden Rice, rice with beta-carotene to provide Vitamin A (by inserting daffodil gene into rice) to relieve blindness and death in many poor countries. The project took 10 years and 60 scientists – but ended up with 70 corporate patents over all aspects of its development. The Rockefeller Foundation invested $100m. The result: Golden Rice became very controversial and ended up getting sold to Novartis, but never launched – which shows great need for reform.

As a result, while pesticide use has decreased slightly, herbicides have risen dramatically: glysphosphate (most commonly known as Roundup, manufactured by Monsanto, whose patent expired in 2000) increased 10-fold from 15 million pounds in 1996 to 159 million pounds in 2012. It’s estimated to double in 2025. (One well-publicized recent result: NYTimes article on herbicides and monarch butterflies)

Transgenes (genetic material transferred by GE techniques from one organism to another) spreading to wild crops or organic crops, which is especially concerning in centers of crop diversity, such as India and Mexico. For example, in Mexico, research showed that 1-10% of native corn might contain transgenes. The issue got very divisive – and likely occured from farmers planting transgenic corn that was banned.

Issues with the ‘seed police’ – With my Wall Street work, I have more of an understanding of this issue. GMO seed companies need to charge for their use. For ex, any farmer growing Monsanto’s Bt corn or canola signs a ‘technology use’ agreement and pay Monsanto $15 or so an acre. They can’t use the seed from the corn, which Monsanto says is to recover the millions spent on research and development, which I can understand some. Also further generations of a GMO crop aren’t the same as the first. Lawsuits regarding this have upheld Monsanto but have created heroes for anti-biotech forces. (google Percy Schneiser in Canada) 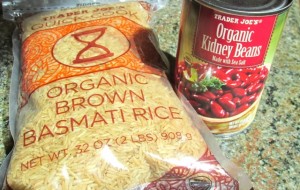 My takeaway: Because I’m most concerned about the environmental effects I will continue to support GMO labeling efforts and primarily eat organic foods, which assure non-GMO. I do acknowledge there are positive GMO possibilities. For example, nutrient boosted GM foods, and drought resistant crops (farmers lose 10-15% on average to drought). Others are biofuels, the making of synthetic diesel fuel out of vegetable matter by speeding up the natural process. And even things like products like orb-weaver spider fibers manufactured for materials of great strength and elasticity, such as for wound healing.

My goal is to educate about the science of nature in layperson speak, through my writing, science and education background. I grew up in the Chicago area, loved living in Minneapolis before gravitating to the West, which is now home.
END_OF_DOCUMENT_TOKEN_TO_BE_REPLACED