Here in Southern California in January, despite some temps dipping into the 20s, I’m still seeing monarch butterflies in our yard, helped by some of our milkweed that manages to stay alive. I posted an article in October about how our tropical milkweed finally attracted monarch caterpillars. I’m happy to report it continues to birth dozens of caterpillars and even some adults.

Here are some photos from our yard, plus a few butterfly photos from a recent trip to Baja Mexico, along with a few things we’ve learned.

Monarch Photos and Lessons Learned…  While I’m still seeing rare monarchs that somehow have made it outside, in December I took in four chrysalis for a week when temperatures dipped below freezing – the two that first emerged as butterflies (called eclosing) made it. All were in their chrysalis stage for at least double the normal time (5+ weeks instead of 2)

According to Monika Moore, who runs a monarch way station that monitors monarchs, 70+ temps are best for the monarch cycle to run its normal course. “If it gets too cold, the chrysalis can freeze, and the caterpillar will slow down it’s eating, and can also die. That being said, our waystation has about 25 caterpillars outside right now, just on the milkweed plants,” she said, tho admits many aren’t healthy. “If they can some how make it on their own, chances are they will be healthy.”

The following are from are yard and our ‘in-house experiment’

In early January, we stayed north of Cabo, and the butterfly population was healthy. Some of the better photos of what we observed:

Does anything eat monarchs and some caterpillars?

Many people have heard that the bright orange color of the Monarch is a signal to birds that they’re toxic. Milkweed contains toxins that cause a bird to vomit. (Decades ago videotape documented a blue jay vomiting minutes after eating a monarch.)  Caterpillars are protected too. All stages of the Monarch – eggs, caterpillars, chrysalis and adult – contain the toxin. See comment below by Monika on the few birds that can eat monarchs. 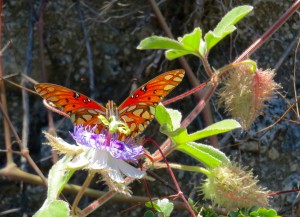 That orange color works for others too. The bright orange Gulf Fritillary also ingests toxins in the passion vine that it depends on as a host plant.

Did you know? Others, like the Viceroy, use orange color to deter but are actually quite palatable.

If you have milkweed, winter is the time to cut it back.  Moore staggers her pruning so there’s always some left to eat and lay eggs on. “We cut ours back 6 to 8 inches from ground and remove any excess leaves. This helps to promote new growth and it takes care of any OE (Ophryocystis elektroscirrha) spores that could be lurking/hanging around.”

OE is a disease monarchs can carry, which causes deformities and appears more common with tropical milkweed than other local types.

My goal is to educate about the science of nature in layperson speak, through my writing, science and education background. I grew up in the Chicago area, loved living in Minneapolis before gravitating to the West, which is now home.
END_OF_DOCUMENT_TOKEN_TO_BE_REPLACED