Note: It’s ‘I found a baby animal’ time! So I’m republishing this 2018 article with a couple updates.

Raptor rehabber Kandie Cansler of Bear Paw Ranch Wildlife Rehab, who helped rehabilitate an injured red-shouldered hawk we found, provided the following list of common questions, and local resources. In our Southern California area called the Inland Empire, Cansler said animals should be kept in the local region.  But because resources and rehabilitators are extremely limited, Project Wildlife based in San Diego County sometimes helps with the spring overload. See below for contact numbers.

Note: This accompanies a general article on animal rescues, more prevalent in spring.

Baby songbird: Put the baby back in the nest where possible… if not, then improvise and create a new nest and tie, tape or nail it to a tree as close by as possible and the parents will generally return to care for it. Fledglings often return to the ground and keep trying its wings until it eventually takes flight. This is part of the process.  DO NOT give it water by any means except in a small bowl with rocks in it to keep it from drowning. If it isn’t feathered yet, keep it in a small box on a heating pad on low or a low wattage light above it (not too hot) until you can contact a rehabilitator.

A bat: It is possible it is young or it collided with something and is stunned, but you can’t be sure so — do not under any circumstances touch the bat with bare hands. “It is a death sentence for the bat as it will have to be tested for rabies and that means decapitation,” says Cansler, who suggests a broom or something similar to scoot it into a box and contact a rehabilitator immediately.

A baby rabbit: Don’t rescue wild baby rabbits, as tempting as it seems. Wild baby rabbits are not suitable pets. For the bunny’s best chance for survival, leave it alone.  Rabbit nests are often built in plain sight, sometimes in the middle of a backyard. They are constructed of fur, grass, and brush. Mother rabbits will only spend a few minutes a day nursing their young; the rest of the day, the babies are on their own in the nest. If you have already picked up a baby bunny, return it to its nest. The mother will still accept it. If the nest is destroyed, you can rebuild it. You can also move a nest within a few feet of where you found it if it is located in a dangerous spot, such as where a lawnmower is often used.

If the mother of the baby bunnies has been killed or there are no signs of her for several days in a row, call a wildlife rehabilitator.

A baby squirrel: Place the baby near the tree from which he fell, and be sure to keep pets away. Watch to see if the parent returns and takes the baby back to the nest. If the mother doesn’t come, contact a wildlife rescue center.

A baby hawk/owl: Baby hawks and owls take special care, as they’re fed mostly rodents and it’s important to keep them wild. Because of their talons and beak, use heavy gloves and cover their heads with a towel before scooping into a box or pet carrier. It is important to contain them for two reasons, first to keep predators from getting them and second, to keep them from wandering off.  Keep them in a dark quiet place and call a wildlife rehabber as soon as possible.  Look out for an angry parent who might decide to strafe you from above.

A baby crow:  Each spring, there are numerous reports of ‘orphan’ crows. There are several important things to know if you find a young crow that appears unable to fly. 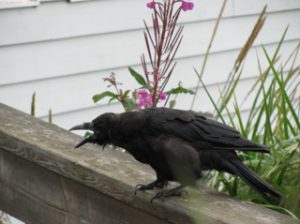 It’s normal for fledgling crows to spend several days on the ground and in low bushes before they are capable of flying with their parents. If you see a young crow on the ground, don’t assume that it is injured or abandoned. Its parents are likely close by waiting until you go away to rejoin the fledgling. Conceal yourself at a distance and observe to see if its parents return. The main menace to fledgling crows is the wandering house cat. If a baby crow is threatened by predators or is too young to survive on its own, immediately contact a licensed wildlife rehabilitator.

Keeping a crow is illegal under United States federal law without a special permit. Also, crows are intensely social animals and being excluded from a family or “cooperative” group is the worst thing that can happen to a crow. If it cannot return to live a satisfactory life in the wild, it will be your responsibility; and, since crows can live for 30 years or more, this is a very serious responsibility.

Baby hummingbird: Here is a chart (sorry, best quality I could get) to help what to do with a hummingbird.There are several basic questions to ask first – is it on the ground, and is it unresponsive? 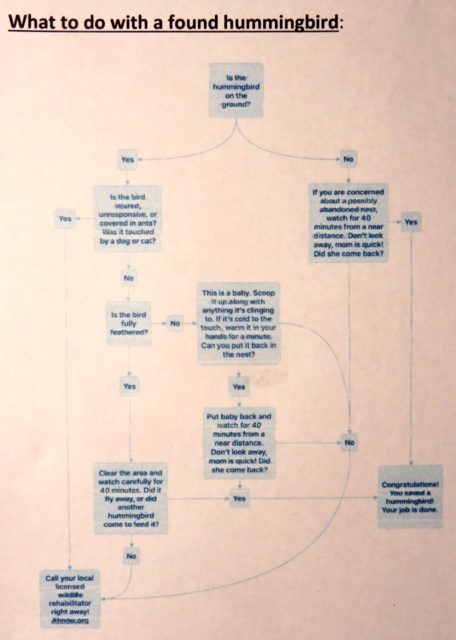 *Jennifer and Anysia below request that people text them a message and photo if possible.

Coyotes/Bobcats/Deer: restricted by Ca. Fish & Wildlife to only designated facilities such as Alpine Zoo (Big Bear) Living Desert, Fund For Animals and other facilities in San Diego County sometimes work with these animal rescues.

Bear: Restricted to Fund for Animals in Ramona, and facilities in the Lake Tahoe area.

Also, Ruben Yzquierdo of the Redlands Animal Control emphasized to not try to grab injured animals, even domestic cats or dogs. “If you grab that pain, you can get bit easily; please just call animal control,” he said.  The same for snake issues: call. Yzquierdo said a couple dogs have gotten bitten recently and he advised being aware if your dog acts differently because they often see or smell the snake first, adding that while the majority of dogs survive, snake anti-venom is available at several local vet offices.

My goal is to educate about the science of nature in layperson speak, through my writing, science and education background. I grew up in the Chicago area, loved living in Minneapolis before gravitating to the West, which is now home.
END_OF_DOCUMENT_TOKEN_TO_BE_REPLACED