It’s Springtime – not only for our plants and trees, but for the animal lives around us. And that means more animal sightings, injured animals and even snake encounters. In addition to the information below, please see my article on the most commonly asked questions on wildlife rescues plus rescue resources for Southern California.

If you find an injured animal, call your city’s animal control. Or, when we found a red-shouldered hawk with an injured wing last summer, we went to the California Department of Fish and Game page for wildlife facilities  and found Kandie Cansler in Yucaipa listed as a wildlife rehab facility for raptors. After a couple months with Cansler, the hawk we named “Hawkins” was released back on our property. Within minutes, Hawkins’ long-time mate joined her. I’m happy to say we still hear and see them both flying together.

Our experience with ‘Hawkins’:

It’s also the time for injured babies or birds falling out of nests. For birds, most people know to look for the nest and place it in. It’s not true that the parents won’t accept the baby back once handled by people. Or you can hand fashion a nest (we’ve used those green strawberry baskets for smaller birds) and tie it up in a shrub or tree where you found it. While the parents may not appear to be present, they are.

Another common occurrence in spring, and also during fall migration, is birds flying into windows. Sometimes a window on the opposite side of your picture window may give the illusion of an open path. “If there is a particular time of day that bird strikes happen, then just shut the blinds or curtains during that time,” says Kurt Leuschner, a bird expert and natural resources professor at College of the Desert in Palm Desert.

If you have feeders or birdbaths, make sure they are within three feet of your window so birds don’t get enough speed to hurt themselves, or move them 15 or more feet away from windows. You can also hang something that moves, such as windchimes or a mobile, in front of your window. Putting translucent bird decals on windows, such as WindowAlert that is available at bird stores or online, can dramatically lower bird hits.

Lastly, the natural predator instincts of housecats kick in when allowed outdoors and  they can do a lot of damage on young animals. Particularly in the spring, please consider keeping cats inside, build them an enclosed outdoor area or consider a Birds Be Safe collar (www.birdsbesafe.com), which has shown a dramatic decrease in bird kills.

On our half-acre in Redlands, we’ve recently had a visiting grey fox, an opossum and of course rabbits and squirrels, as well as several varieties of raptors. Be kind to our animals who predate on rodents by avoiding the use of rodenticides, most often used in those black or green boxes.  Research continues to show high levels of rodenticides and mortality in animals through secondary poisoning.

If you live near or are hiking in a natural area, mating season runs through May for rattlesnakes, so sightings are more frequent. Yesterday at dusk I was walking on the West Ridge Trail at Oakmont Park and a mid-sized pink Western Diamondback rattler let me know that he was sharing the trail with me by rattling and then I saw him with his head lifted.

Snake experts such as Loma Linda University’s William Hayes all agree that it’s important to move away. Rattlesnake bites occur more often when people try to handle the snake. In my case there was a spur to the side of the rattler, which I could easily take. I looked back after going ten feet and the snake was moving off in the other direction.  If you have a rattlesnake that has moved onto your property, it will likely move on.

But if it doesn’t, Hayes suggests relocating the snake to a natural area. (Click here for more on relocating rattlesnakes) “Studies show that most survive the relocation and gives them a chance of surviving. It’s much better than killing it,” he says. On our San Diego property which abutted a canyon, my husband relocated several smaller rattlesnakes by scooching it with a broom into a garbage can. But it’s best to call your animal control if it doesn’t move on. 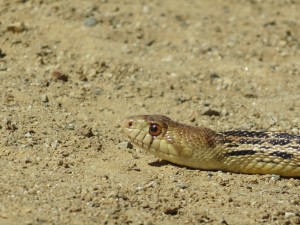 Gopher snakes often get mistaken for rattlesnakes, and are a good snake to have around because they, like rattlesnakes, play a vital role in reducing rodent populations. More people ask how to control gophers or ground squirrels on their properties. One natural answer is snakes!

My goal is to educate about the science of nature in layperson speak, through my writing, science and education background. I grew up in the Chicago area, loved living in Minneapolis before gravitating to the West, which is now home.
END_OF_DOCUMENT_TOKEN_TO_BE_REPLACED