A couple things have prompted this post. First, we have a potentially devastating disease hitting citrus trees in SoCal with the arrival of an insect Asian Citrus Psyllid. To combat it, a pesticide spray composed of two common insecticides is being applied to local trees. Second, I read a Sierra magazine article called Parkinson’s Alley, on the high rate of Parkinson’s disease in a Central California town surrounded by high agricultural pesticide use. Click here for my article on human effects.

The takeaway: Check alternatives to pesticides and when necessary, use them cautiously. Their use causes damage to beneficial insects and other critters, and potentially for you.


I was surprised with the warnings when I looked up the citrus pesticides, both widely used (Merit or imidacloprid – the pesticide used in flea collars – and Tempo or cyfluthrin). Yet when I called the state’s information line they only touted that the pesticides are very common and very dilute.

Below is from the second paragraph in a 2011 Florida Citrus Pest Management Guide about the psyllid & treatment (note: the bolded parts were in the guide, NOT my additions)

… it should be noted that most of these products will have negative effects on natural enemy populations that keep other potential pests below damaging levels. Thus, it is likely that new pest problems may develop as a result of increased insecticide use for psyllid suppression…. 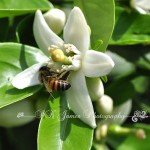 In other words, these broad spectrum insecticides may kill everything living in their path, they’re not specific. They’re particularly hard on bees. When I asked the person on the Food and Ag Pest Hotline about guidelines for safe use, she wasn’t sure and referred me on to a technician. The technician did acknowledge that there might be some kind of effect and yes, any bees or insects on the foliage at the time of spraying would be affected (killed) but that you could take precautions by spraying in the evenings and in the early mornings. She also said anyone can buy them at a place like Home Depot.

My concern: why aren’t these precautions provided? I’ve asked the director of the Inland Orange Conservancy here in Redlands on what they’re advising. While less effective, there is also a predatory wasp alternative – see below.

Resources are below for more information, but Josh Vincent of the Northwest Coalition for Alternatives to Pesticides (NCAP), an organization I’ve supported for a long time, provided the following comments:

Imidocloprid Fact Sheet (Journal of Pesticide Reform) – this is the largest volume of the pesticide used in the world; has many applications, including flea collars

My goal is to educate about the science of nature in layperson speak, through my writing, science and education background. I grew up in the Chicago area, loved living in Minneapolis before gravitating to the West, which is now home.
END_OF_DOCUMENT_TOKEN_TO_BE_REPLACED