I heard some coyotes howling the other night and what a comforting sound. I hadn’t heard them for many months and with my last article on this subject opening with a sick coyote, it was nice to hear them sound healthy. I tried not to think about the rabbit or rodent they were probably about to eat. We’ve also seen some rats but thank goodness they’re all outside.

This is third in a series on rodent control, this one focusing on what communities, organizations and businesses are doing – and not doing about the significant issues with rodent poisons. After interviewing about ten people, my takeaway is this:

Changes are occurring but not fast enough – so it’s important for consumers and business owners to educate themselves and others about the concerns, and seek other solutions.

For more background, please see my previous posts – using IPM for rodent control and one on the effects on our ailing wldlife. In a nutshell, the problem with today’s most-used rodent poisons arise when a rodent who has eaten the bait does not die right away and is eaten by another animal, or the bait is eaten by a pet or heaven forbid, a child. 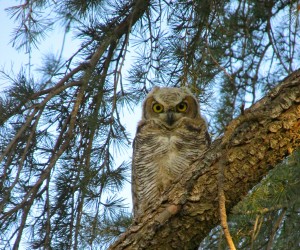 Some organizations and forward-thinking communities are mobilizing to get the word out. Here are some in California:

Raptors are the Solution in Northern California was started by Lisa Owens Viani after a neighbor found two fledgling Cooper’s hawks in her kiddy pool. A year later she found an adult hawk collapsed in a pool of its own blood. All three had rat poison in their systems. “They’re often found by water because they want to drink since they’re bleeding to death,” she said. Her organization has developed educational materials, such as downloadable flyers that people can post when they have nesting owls or hawks in their neighborhood. They’ve also funded ads that are appearing on buses in the San Francisco area.

Poison-Free Malibu: In Southern California, the Malibu Agricultural Society started a campaign called Poison-Free Malibu. According to secretary Kian Schulman, the society got involved when some hikers found a dead mountain lion in the neighboring Santa Monica Mountains that had high levels of rodenticides in its system. “We wondered what we could do so we started by seeing who was selling it here in Malibu.” They found six stores selling the anticoagulant and other rodenticides and after leaving them with the research to review, all six removed them from their shelves, including a Ralphs, Pavillons and CVS Pharmacy.

They helped Malibu pass a resolution urging businesses to no longer use or sell the products. They’re also working with their Chamber of Commerce, and are now spreading the word to neighboring cities. To-date sixteen cities in California, including San Francisco, Whittier and Calabasas, have passed resolutions that urge businesses to no longer use or sell anticoagulants. Three more, including Los Angeles, are in progress.

Las Virgenes Homeowners Federation: In the Santa Monica Mountains areas this umbrella organization of homeowners groups is developing a public education campaign that includes talks to HOAs and other groups, and a garage sale where people can drop off their rodent poisons and other garage junk. “We’re also developing materials that show healthy animals and what rodenticides do to them. People don’t know, and those visuals tell the story,” says President Kim Lamorie.

In my experience, pest control technicians called to our house have been quick to recommend the anticoagulant rodenticides. When I’ve brought up what research was showing about effects on wildlife, they minimized the issues. My hope is that this is slowly changing. We hired a California based company, All Pest Pros, because they promised they would seal all entrances on our roof to prevent rats from entering our attic, with a one-year guarantee. It took a couple months – it’s amazing what little space rats need to enter under our tile roof — but they’re finally sealed out. “Companies seldom rodent proof and instead put customers on monthly rodenticide services. We’re trying to get the message out that that’s a Band-Aid approach,” says David Sager, the company’s general manager.

Another company, Craig & Sons, is in the process of getting a GreenPro certification and will then certify their licensed technicians. GreenPro certified companies first inspect and monitor the property, and eliminate sources of food, water and shelter for pests before considering pesticides. Craig & Sons’ manager Christine Cornejo said they can offer inspections now, adding, “I think that people sometimes forget that we are people with children and grandchildren too. We know the importance of protecting the earth, the water, the air, all animals, and our kids. We are constantly looking for ways to improve service.”

Josh Adams is a director with Pest Control Operators of California (PCOC), a non-profit organization with 1100 members. He acknowledged the problems with anticoagulant rodenticides and said PCOC is encouraging their members to become GreenPro certified and focus on non-poison techniques as early as possible. “It’s much more efficient to use IPM, which has less environmental impact and typically takes care of the problem. It’s important to see where trees are overhanging the roof, and do types of trapping where you can remove the dead rodent and use baits as last resort,” he said.

PCOC also supports a change in the California Code of Regulations proposed by the California Department of Pesticide Regulation (DPR) where second-generation anticoagulant rodenticides and the nerve toxin bromadiolone would be designated as restricted materials in California. This means the average homeowner could not purchase the materials but pest control companies could. “Let’s get these out of the hands of the average consumer who is ill-applying this material. It will also track who is purchasing this material and how much,” Adams said.

Adams admits it’s a struggle getting the word out to all pest control companies, especially those who are not PCOC members. For example, technicians are required to renew their license with continuing education every few years. However, Adams wasn’t aware of any changes made yet in the education process to address these concerns.

On a national level, in 2008 the EPA issued regulations to restrict the use of rodenticides that are finally being enacted. Today consumers can no longer buy pellet or loose bait form but can purchase tamper-proof bait stations. The exception is Reckitt Benckiser, the makers of d-CON, which has filed appeals and continues to sell 12 products the EPA recommended be removed because of safety concerns for children and the environment

Hardware stores and retail stores like Home Depot and Lowe’s are large sellers of these products. Safeway and Kroger have pulled d-CON off their shelves and d-CON no longer carries the Good Housekeeping Seal of Approval. However, most large retail stores will not act until they are told to remove them.

My calls and visits to local hardware stores and to Lowe’s and Home Depot were depressing. At the Yucaipa True Value Store a manager did say they tell homeowners to be careful with use but emphasized that the manufacturer Reckitt-Benckiser was financially very good for them. He referred me to their regional office but I didn’t hear back. At the local Lowe’s store, an assistant manager’s response to whether they might consider removing the products said, “the company makes business decisions, not ethical decisions.” The store manager at Home Depot referred me to their legal department for what he termed “a politically correct answer” after saying he didn’t know anything about the issue.

Raptors are the Solution –great flyers, brochures, current list of cities that have passed resolutions. See their YouTube Raptor Blues (made by a high school student)

My goal is to educate about the science of nature in layperson speak, through my writing, science and education background. I grew up in the Chicago area, loved living in Minneapolis before gravitating to the West, which is now home.
END_OF_DOCUMENT_TOKEN_TO_BE_REPLACED