Water your trees and don’t overprune them.

Those were two primary takeaways from ‘Tree Care During Drought Forum’ held on Nov 12 in Redlands CA. The forum featured Dave Roger, a consultant urban forester who has worked with several Southern California cities. This includes Claremont CA which this year won a significant award for its program to save drought-stricken trees. The event was sponsored by the Inland Empire Resource Conservation District and the Redlands Sustainability Network.

How Serious is the Drought on Trees?

Historically, trees in California and elsewhere have survived on the rain they receive in the rainy season. Here in California that can be only three to perhaps six months of the year.

Because of our six-year drought and dry years prior to that, our areas’ historical annual precipitation of over 13 inches has dropped to 10 inches for the 30-year average. The past six years logged below 10 inches.  Now, this rainy season’s weather forecast is below normal again.

Roger (along with our City of Redlands’ arborist Erik Reeves) noted that drought-stressed trees are most likely on properties that have shut off or greatly reduced irrigation, without giving supplemental water to the trees.

Symptoms include the wilting, curling or yellowing of leaves. Deciduous trees may develop “scorch” which is browning along edges or between leaf veins. Evergreen needles turn yellow, red, or brown. 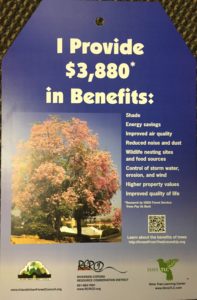 Deep, infrequent watering of trees is best, getting down a foot, even more for large trees.  Shallow watering promotes shallow roots which poses problems when the tree becomes larger.

Remember that roots spread out far.  So the area to water spirals out from the trunk to the canopy edges and even beyond. A soaker hose that circles the tree and ends at the canopy edge works fine. Other methods, especially if irrigation water runs off, is filling a five-gallon bucket that has a hole in the bottom, and moving it around the dripline.

Small trees require about 15 gallons on a weekly schedule, medium trees about 40 gallons at a time, while larger trees require 100 gallons. The cost will vary, depending on your city rates and the tier you fall into; however, even for the highest-level water user in our city, maintaining a large tree at 100G/week will cost under $1.20 per month.

If you don’t know the gallons per minute rate of your irrigation system, you can test it by using a five-gallon bucket with your intended tree watering implement (soaker hose or a hose on a slow drip) to see how long it takes to fill. Then use the length of time to calculate the watering time based on volume you want to apply.

Click here for more info on watering trees during drought.

“Mature trees should not be trimmed or trimmed as little as possible.” Urban Forester Dave Roger

According to Roger, Californians tend to overprune their trees. “And mature trees should not be trimmed or trimmed as little as possible.  About 75% of their energy derived from photosynthesis goes to just keeping itself alive,” said Roger, so hard pruning is very stressful. Of course, removing dead or diseased branches is warranted.

And please – don’t top trees. The cutting of a tree’s main branches to stubs is a tree trimming practice strongly discouraged by arborists certified by the International Society of Arboriculture. Topping permanently alters the tree and promotes weak suckers that require further pruning every two or three years.

So, to summarize, be kind to your trees by watering them deeply. Go light on the pruning. And pray for rain for those of us in drought areas.

Note: Copies of the handouts from the forum are available here or you can email me – linda@ifnaturecouldtalk.com –  for copies and I will send them to you.

My goal is to educate about the science of nature in layperson speak, through my writing, science and education background. I grew up in the Chicago area, loved living in Minneapolis before gravitating to the West, which is now home.
END_OF_DOCUMENT_TOKEN_TO_BE_REPLACED