For people with oaks, I’ve written a more detailed article here on proper watering and care.

After five years of drought here in Southern California we have a tree crisis – in our city alone (Redlands) we have 1400 dead street and park trees. Some are young, but many are old ones that take decades to replace.

Many have been stressed by the continuing drought in California. In addition, well-meaning people have been removing lawns and changing to low-water landscapes — but their trees are not getting the water they need.

Here are some guidelines on watering your trees & useful resources: But first, a reminder of why trees are so important. 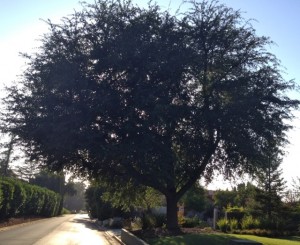 If you lose a large tree, you’ve lost:

What does a tree under “drought stress” looks like?

How to water
All trees need deep watering. The amount depends on the tree’s age and species, and also soil type. But here are some general guidelines.

Young trees need at least 15 gallons of water each week. Two to three times a week is best during the first several years.

Mature trees need deep watering once to twice a month around the drip line, where the branch edges are. The water should soak down about eight inches. For example, run a drip irrigation or soaker hose for one hour. Other options are using a bucket with holes or watering by hose, or leaving a hose on at a low rate for several hours, moving it around the tree’s perimeter. You can water by hose any day of the week.

Even native trees like oaks need water to replace the rainfall that falls in a normal year. We’ve been in a drought for five years and trees haven’t gotten their normal rainfall.

My goal is to educate about the science of nature in layperson speak, through my writing, science and education background. I grew up in the Chicago area, loved living in Minneapolis before gravitating to the West, which is now home.
END_OF_DOCUMENT_TOKEN_TO_BE_REPLACED